So what is the difference between a cupcake and a fairy cake?

If you hadn’t realised from all the hashtags across social media 18th to the 24th of September is
National Cupcake Week! The Caking and Baking Team often answer questions about recipes, styles
and methods but there is one thing that plays on the mind of many a British baker, what is the
difference between a cupcake and a fairy cake?

In my opinion there are three distinctive things that differentiate a traditional fairy cake from a more
modern cupcake.

1. Firstly, the size, a fairy cake is much smaller than a cupcake a point proven when you try to buy
paper cases, Sainsburys for example sell both cupcake cases and fairy cake cases.
Fairy cakes are also baked in shallower trays and cupcakes are baked in deeper muffin trays.

2. Secondly, the sponge itself, a traditional fairy cake is a classic Victoria sponge recipe whereas a
cupcake can be any flavour you can imagine lemon, chocolate, salted caramel, prosecco, gin &
tonic…. the possibilities are endless.

3. Thirdly, the decoration, a good old-fashioned fairy cake usually has a little dollop of royal icing and
are sometimes topped with sprinkles, but a cupcake has a tall buttercream swirl or rosette, finished
with a topper to compliment the sponge and icing flavour such as a piece of chocolate or a
strawberry. A cupcake is often filled with jam, caramel or curd before its iced too. 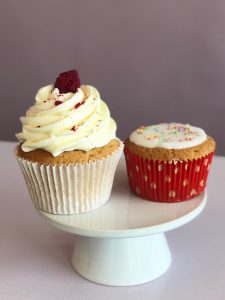 Now we know the difference and the great cupcake vs fairy cake debate is over. (don’t even ask

about the muffin!) It’s time to move onto our personal favourites and some more fairy cake trivia.

Do you know how the fairy cake got its name?

I’ve often wondered this, why fairy cake? Well there are two schools of thought.
1. It’s such a small cake that it’s the perfect size for fairies.
2. Traditionally bakers cut the top off, added some jam and cream, cut the tops in half and put
them back on the cake like wings, making them look like fairies. We now call these butterfly
cakes.

I don’t know about you, but I like to think of the fairies sitting on toadstools, munching on little
cakes! 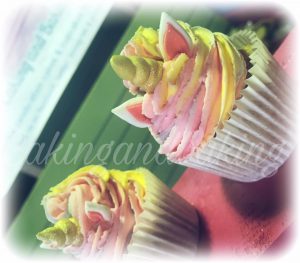 I’m a traditionalist at heart and like nothing more than a classic Victoria sponge, filled with our
homemade raspberry jam and topped with soft, sweet vanilla buttercream and finished with a ripe
raspberry.

However, our zingy lemon cupcake, filled with homemade lemon curd and finished with a
buttercream and lemon curd swirl is a firm favourite, and don’t forget our delicious salted caramel
oh and our gorgeous red velvet …. Ahhhh how do you choose?? 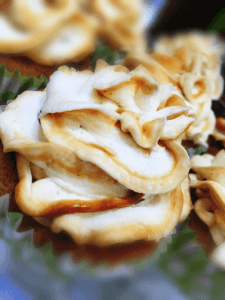 A cupcake is very versatile, it can be a ‘thank you’, a ‘thinking of you’ or a ‘congratulations’. Caking
and Baking lovingly create boxes of 6 delicious cakes which can posted anywhere in the UK mainland
with a free gift card easily through our shop. 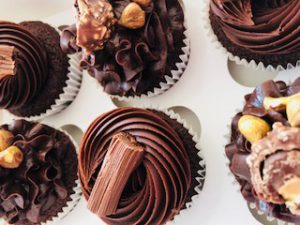 It can also be a very powerful marketing tool for business. Corporate cupcakes with company logos
make a huge impact at trade shows, conferences and meetings and are also a fun and tasty way to
thank customers and clients, celebrate a deal or business anniversary and treat staff to a delicious
snack for their hard work. 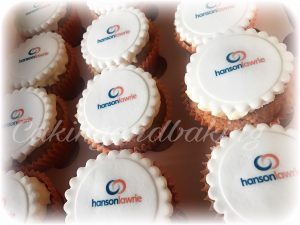 Cake posts on social media are far more engaging than insurance posts for example, so if you need
to increase your internet presence try uploading a picture of our cupcakes with your company logo
and watch it fly!